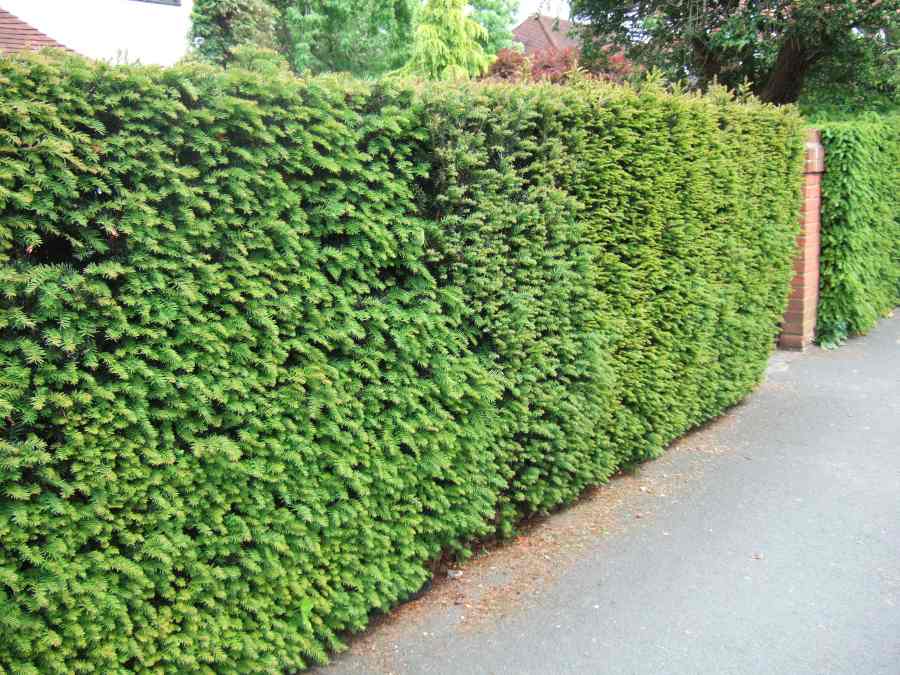 Most of the gardens I work in are a pleasure to work in, even in winter, because they’re sheltered by trees and shrubs and hedges, and the wind mostly goes over the top.

But one place is surrounded by a desert of bare arable fields, no woods, no hedges, no trees. The winds blow right through, even if I’ve got as many as seven layers on top and three layers on my legs. The garden is set within a larger estate, and there are some trees around the site, but on the south side those trees are evergreen things like holm oaks and cypresses, and thought they might slow down the wind a bit they also block the sun all day. And even though they might slow the wind down a bit, it’s only higher up. At ground level there are no branches, no leaves, and the wind cuts through. Indeed the wind may even be stronger at ground level because it’s being funnelled through the gaps between the trees which block it higher up. On a cold winter’s day you can be warm if you’re out of the wind and in the sun, but if you’re out of the sun and in the wind you start cursing evergreen trees. Don’t get me wrong, if there’s enough space, or you live in a place that’s hot and dry all year round, then evergreen trees may be just what you want, but they’re the wrong thing for people with small or even medium-sized gardens in cool temperate climates.

And of course my point here isn’t just about the comfort and wellbeing of gardeners, but the wellbeing of the plants and the animals and all the life in the soil. In the summer it may get too hot for comfort, and we need shelter from the drying effects of the sun, but in winter we need to let the sun in and get protection from the wind. Our houses need protection as well. The more they’re blasted outside by cold winds, the more heating they’ll need to stay comfortable inside, and if the houses are heated by fossil fuels – like methane gas or diesel oil or electricity generated from fossil fuel, whether coal or oil or gas – then the more greenhouse gas emissions there’ll be.

The mechanistic short-cut answer may be to put a fence. If we can afford it, that is. Fencing is expensive. And fences stop wild animals from moving. They won’t stop rabbits unless we bury chicken wire below ground, but they will stop hedgehogs, who need big territories, bigger than one ordinary-sized garden, so we need to leave holes (13 x 13 centimetres, or 5 x 5 inches) at the bottom of the fence for the hedgehogs to get through. But it will slow the wind down if it’s a fence with some gaps in, a hit-and-miss fence with rails on alternating sides of the posts, or verticals on alternating sides of the rails. A solid fence will stop the wind completely, which sounds great, but there are two drawbacks: sooner or later it’s likely that the wind will huff and puff and blow the fence down; and even before that, the wind will be forced over the top, so that it eddies and causes even more trouble.

So while overhead we need our trees to be deciduous to let the sun in, at human level it’s great to have hedges that are thick and dense and which include at least some evergreens. That doesn’t mean we need to plant entirely evergreen hedges, and indeed for a windbreak it may be better to plant a mixed hedge of both deciduous and evergreen species, because an entirely evergreen hedge may act as too solid barrier in a similar way to a solid fence. 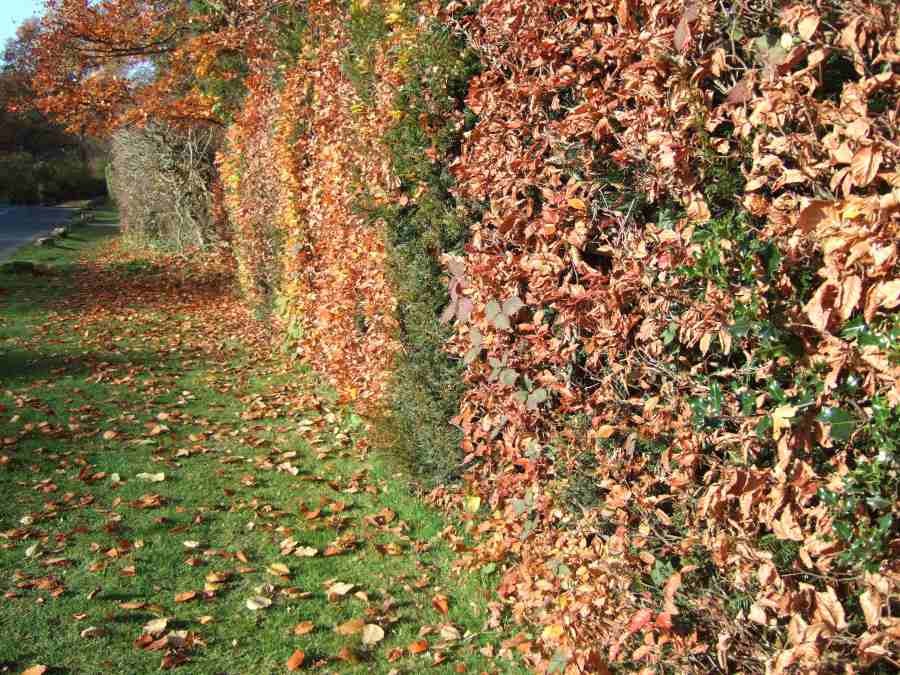 And we can look for species which have a quality which make them especially useful for climate-friendly gardeners: they’re slow-growing, so that gardeners don’t need to cut the hedge very often, and if instead of hand tools we use hedgecutters that are powered by fossil fuel, then slower-growing hedges mean a smaller greenhouse gas footprint. (This is the opposite of most climate-friendly plants. We usually want plants that are vigorous, which will grow a lot each year because they’ve absorbed a lot of carbon dioxide and turned it into stored carbon in the plant and in the soil.)

There are many possible hedge species, and although in Britain we don’t have many native evergreen trees or shrubs, three of our evergreen trees make excellent hedging plants. 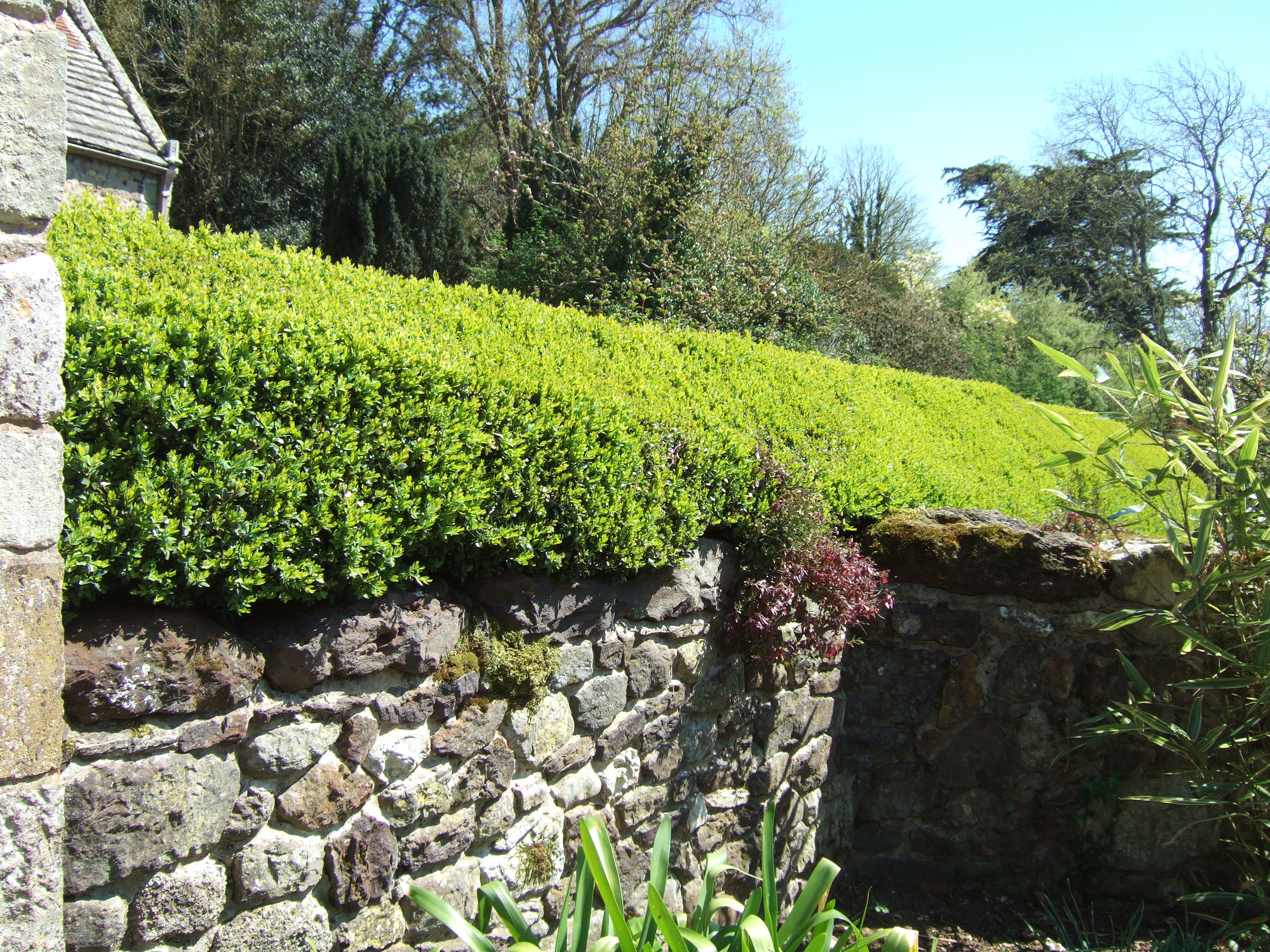 Box, Buxus sempervirens, is a fairly southerly species and is not found wild outside southern Britain, but it can grow well in parts of Britain outside its native range. It’s one of my favourite species because of its small-leaved close texture and aromatic smell, and although the tiny pale yellow flowers last only a short while they’re a favourite with bees. But many people will be wary of planting it in case it falls prey to box blight, though it’s not inevitable that box will get it, or that if it does get it that it will die, especially if we don’t cut it too often. This reluctance is a shame, since for me box is the most attractive of all the three native species commonly used for hedging. However in colder parts it may be better for internal hedges because it is not as hardy as holly or yew. 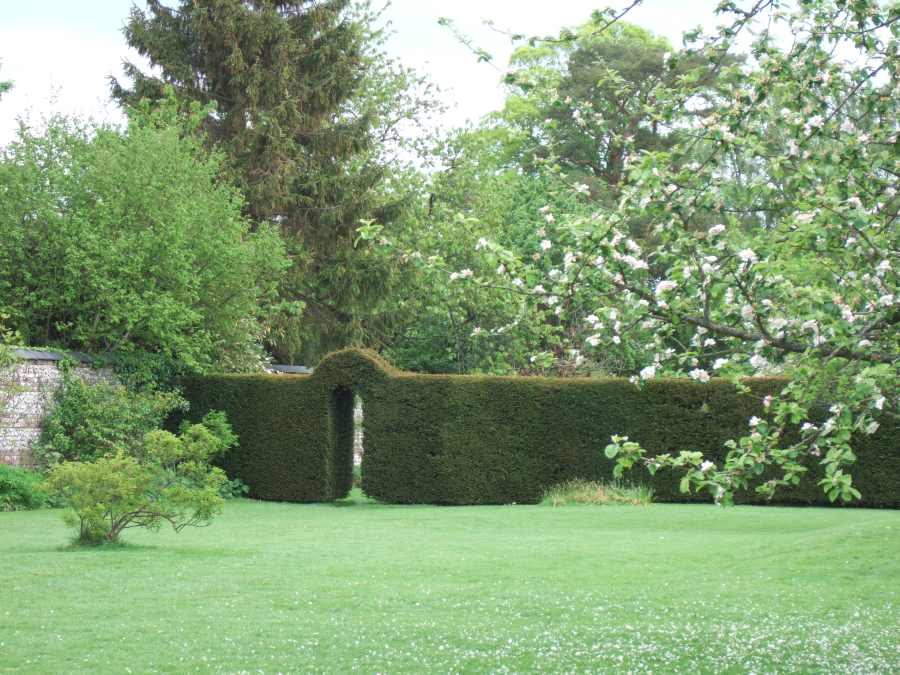 Yew, Taxus baccata, is a beautiful long-lived tree and is also the hedging plant most of us will see in most old well-established gardens. It can make a taller hedge more quickly than box, but it’s still slow-growing enough to not need cutting more than once a year. Gardeners who like edible plants may have mixed feelings towards yew, because although the red flesh of the fruits is edible, the seeds inside the fruit, the leaves, and every other single other part of the plant, even the wood itself, is deadly poisonous. We can’t eat box, and we can’t eat holly, but we most definitely can’t eat yew. On the other hand, the wood is durable and beautiful. 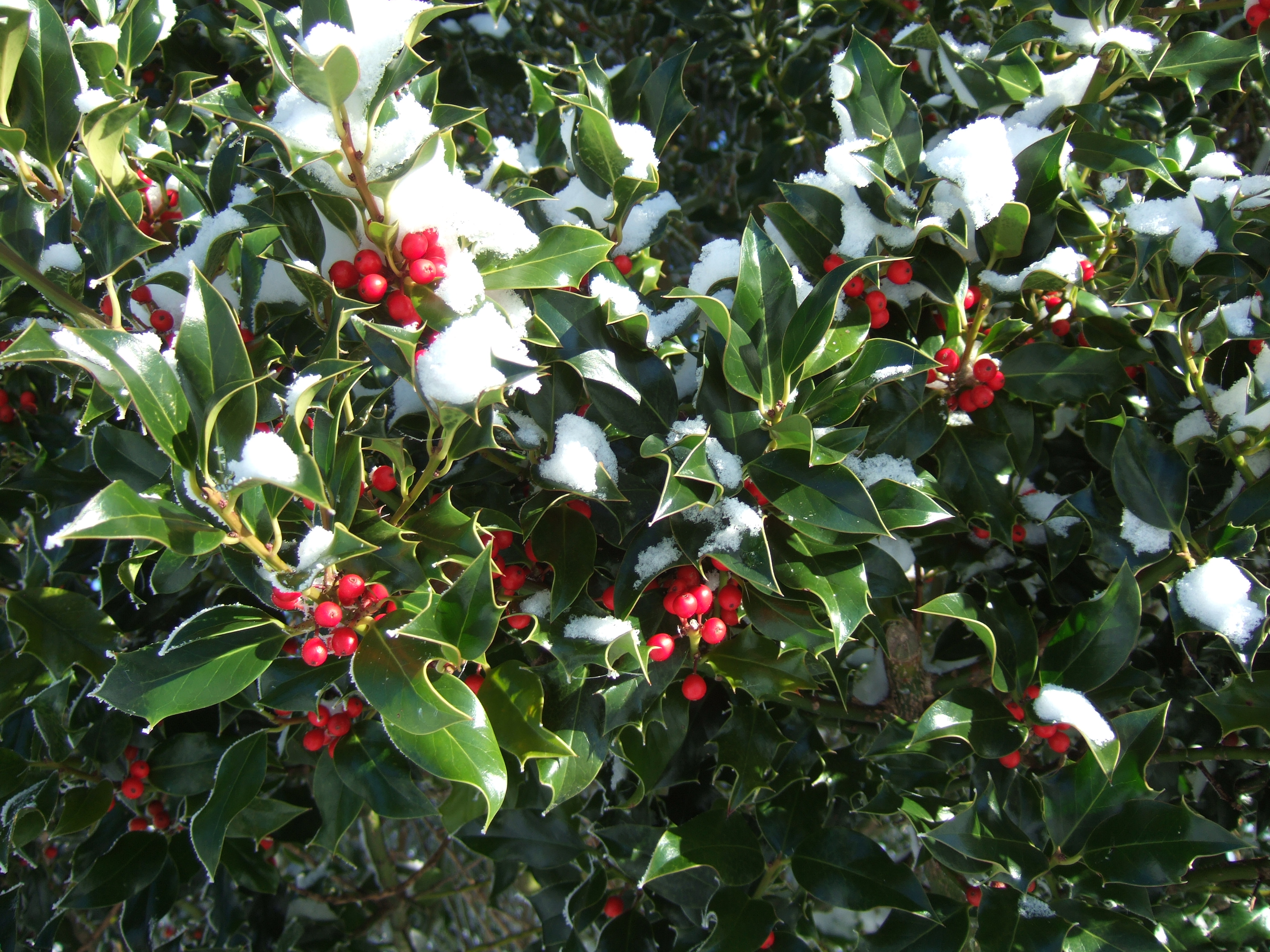 Another of those native evergreens, though, makes an excellent hedge with few drawbacks: the one on almost every Christmas card, the one that goes with ivy, the red-berried bird-feeding bird-sheltering cat-deterring green-burning wonderfuel that is holly, Ilex aquifolium. When David and Barbara Snow studied birds and the berries that keep them alive in winter, they found that holly was one of the best species, partly because the berries last a long time. Holly is also one of the food plants of the holly blue butterfly. Holly will grow on almost any soil and is also quite slow-growing, though it’s quicker than box, and quicker than many people think. There are many varieties, both of our native holly and of other holly species. 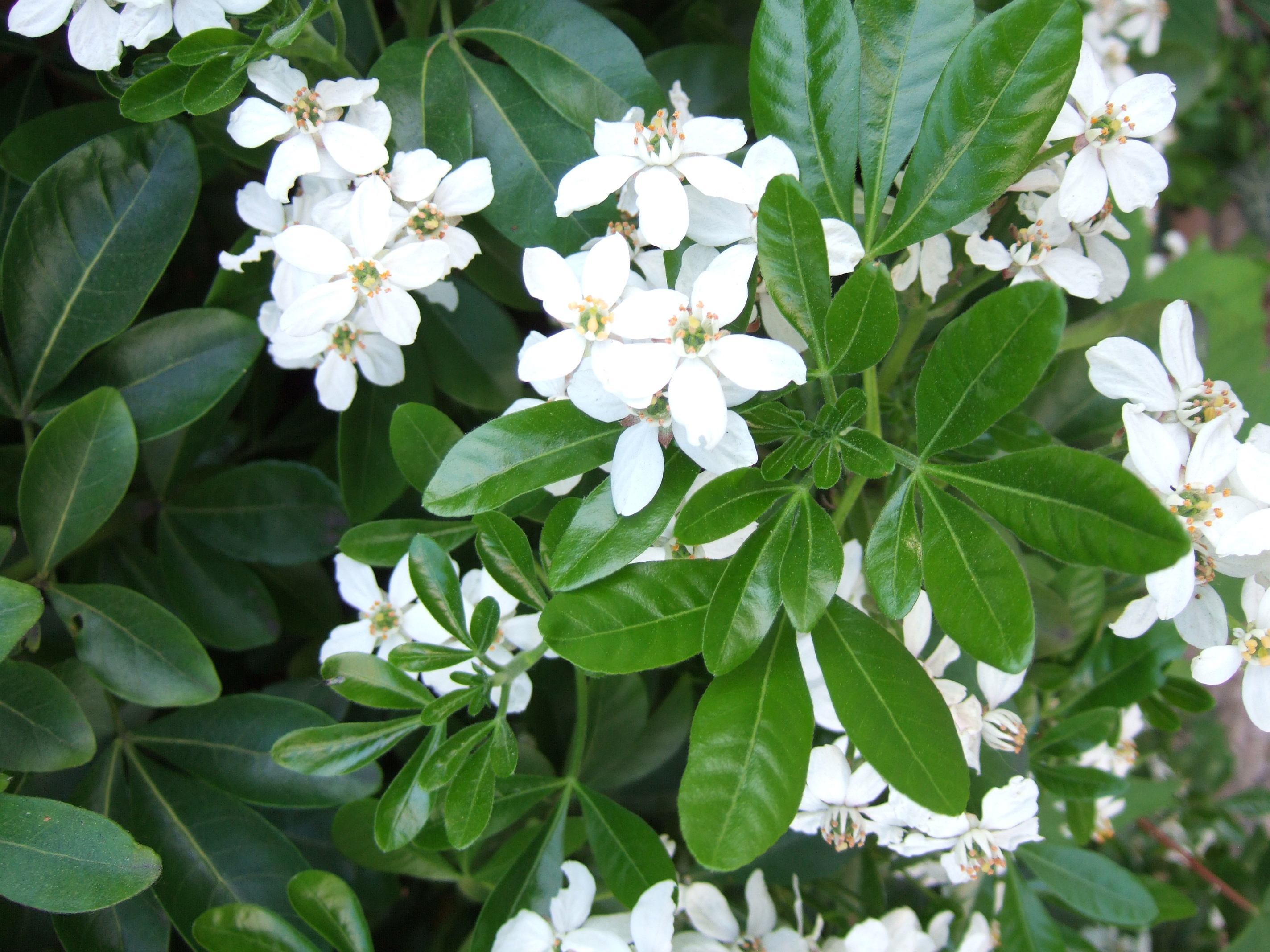 There are of course also many non-native evergreen species which we can choose for hedges, depending on our garden’s soil, aspect and climate. Other attractive and mostly slow-growing evergreens include Aucuba japonica which can be a raingarden plant, the aromatic and fragrant-flowered Choisya ternata, the nitrogen-fixing Elaeagnus, some of which, such as Elaeagnus x ebbingei, are evergreen, with very fragrant flowers and edible fruit, and Mahonias such as Mahonia aquifolium with their fragrant yellow flowers and dark purplish edible fruit. It may be better to mix these with some hardier deciduous species for protection in colder parts of the country. Plant deciduous hedges species in the autumn.

When’s the best time of year to plant evergreen hedging plants? Well, before EarlySummerWatch starts, because late spring is our last chance before early autumn. The answer depends of course on the weather, and on where you live. It’s best to plant evergreens when they’re actively growing, so they can grow new roots into the soil and get themselves established – but of course it’s also important that they should be able to grow, and for that they need the soil to be both warm and moist, and ideally they also need the air to be moist so that they don’t lose lots of water from their leaves. Deciduous species can be planted when they have no leaves, and that’s the best time so there’s less chance of them drying out and dying, but by definition evergreens must be planted when they’ve got leaves. So in the warmer and drier south and east it may be best to wait and plant in early autumn. But in the cooler and moister north and west it may be possible – and sometimes it may be better – to plant in late spring. 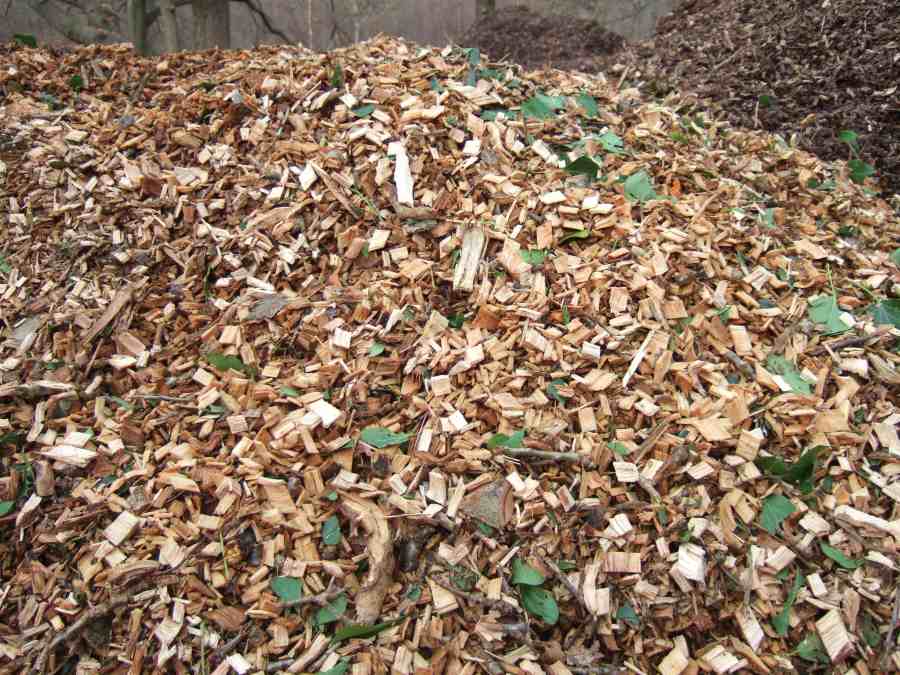 Whenever we do it, we can help our newly planted hedge to survive and thrive and protect the soil with mulch to a good depth (at least 2″ or 5 cm, and preferably 4″ or 10 cm). The mulch can be something like semi-composted bark or woodchip, which will keep the soil moist and suppress the weeds that would compete with the new plants.

So some people may still have a chance, if their soil is still most and rain is forecast, but many of us may have to wait now till the autumn. Either way, once those hedges are established, we can look forward to the shelter those hedges will give us, so that in summer our soil will be moister, and when the hedges slow down the cold winds of winter we and our gardens and houses will be warmer.

But perhaps you’re a harder worker than I am – indeed I’m sure you are, I’m quite lazy really – and it still doesn’t seem important to you to choose slow-growing plants that only need cutting at most once a year. So consider another aspect of hedge-cutting. Hedges are one of the best habitats in our gardens for birds to nest in. But don’t cut hedges while the birds are nesting, and though the main season lasts from March to August, birds may also nest even earlier or later. The less often we need to cut a hedge, the easier it is to find time in the year when we can cut it without disturbing birds. Thanks to the Wildlife and Countryside Act it’s against the law to destroy birds’ nests, but even if it were legal, no climate-friendly gardener or wildlife-friendly gardener would want to harm nesting birds. After all, where would Springwatch be without them?

* Apologies to people not living in the United Kingdom who don’t have the British Broadcasting Corporation, Beeb, Auntie, BBC offering such fine radio and television.