Climate and land – how gardeners may affect climate 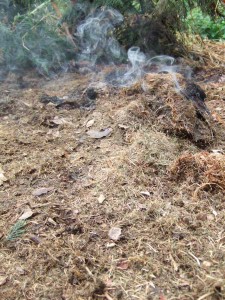 The three main greenhouse gases produced by unsustainable land use are:

Black carbon, or soot, although it is not a gas, can also be caused by unsustainable land use, behave like a greenhouse gas, and contribute to climate change.

Carbon dioxide, CO2, is a natural part of the carbon cycle, but human land uses often add more, especially from habitat destruction and the cultivation of soil. When we turn woodlands, wetlands, and other natural habitats into pasture, arable fields, buildings and roads, or when we plough or dig the soil, the carbon held in the soil and vegetation becomes extra carbon dioxide and methane to trap more heat in the atmosphere.

Here are some of the ways in which we gardeners may cause extra carbon dioxide to be added to the atmosphere:

Methane, CH4, is also a natural part of the carbon cycle, but human land uses often add more, especially from anaerobic soil, artificial wetlands such as rice fields, and from the guts of farm animals, especially ruminants such as cattle and sheep.
We may cause extra methane to be added to the atmosphere in several ways:

Nitrous oxide, N2O, is a natural part of the nitrogen cycle, but human land uses often add more.
Gardeners may cause extra nitrous oxide to be added to the atmosphere:

Black carbon is not a gas, but it acts like one, because it can be suspended in the atmosphere and absorb heat.
We gardeners may easily cause extra black carbon to be added to the atmosphere:

Many of us have pyromaniac tendencies, but if we want to protect the climate we need to cut down on our bonfire habit, because burning garden prunings and weeds, especially if they’re wet, will turn them into soot as well as carbon dioxide. And of course if we buy anything transported by diesel-powered lorries then there will be black carbon emissions from the exhaust.

For anybody who wants to find out more, there’s excellent information on land use and climate change in Britain available from Farming Futures. On a worldwide scale, the Worldwatch document ‘Mitigating climate change through food and land use‘ is good on both good and bad farming.