This is a website about how to be a climate-friendly gardener, but the same principles apply to any land use. We need to use the land to get our food, energy and materials, but do it in a way that protects soil, water, wildlife and climate. This is a huge subject, and there’s more about it in the book on which this website is based.

But for a taster on one aspect, a good thought-provoking place to start is David McKay’s Sustainable Energy – without the hot air. Here’s the map in Chapter 28 of a mixture of his energy plans for Britain. 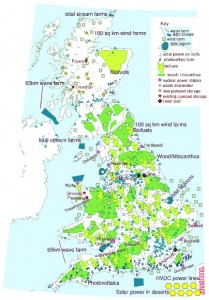 David McKay’s illustration of a plan for a Britain using renewable energy (Figure 28.2 in his book and website)

The sources of renewable energy such as tidal barrages, woods and biomass are not of course shown exactly where they’d go, but they are drawn to scale so we can get an idea of what a Britain using renewable energy would be like. He says that if we don’t like any of his suggested possible mixtures of energy sources then we can come up with our own plan – as long as we make sure the figures add up. The Climate-Friendly Gardener has done this and enjoyed the challenge.

One of the features that is included in all David McKay’s plans is more woodland. Even the small contribution that wood could make to our energy demands would be a big change on the ground, as we can see from this map. A lot more woods, plantations, orchards, and agroforestry, if designed well and managed well, could be great for landscape, soil, water, wildlife, and food production as well as for climate.

The problems and possible solutions to the challenge of sustainable food production are beautifully and clearly explained in Rebecca Hosking and Tim Green’s film for BBC Natural World, ‘A Farm for the Future‘, and the solutions include a permaculture approach, including an increase in woods and orchard gardens. Some farmers were ahead of most gardeners when it came to looking after wildlife, but now many public officers have caught up (though many politicians, especially in the current government, still have a way to go!) and to get any public financial support farmers have to show that they’re improving their behaviour when it comes to wildlife. Unfortunately many farmers cannot get much help, not because they’re not good farmers, but because they only own a small amount of land (and the British version of agri-environment schemes is tilted in favour of large farms) or because they don’t live in a ‘target’ area, and more than in any other job, farmers can’t just ‘get on their bikes’. But farmers who live in a ‘priority catchment area’ where there’s a ‘catchment-sensitive farming’ project may also be able to get help to improve their farming methods. Catchment-sensitive farming is about protecting water and soil as well as wildlife, so many of the things which a farmer can do to look after their local river catchment will also be good for the climate. Elsewhere help is limited, partly because of delays before the new Common Agricultural Policy starts in 2015, so farmers need (as ever) to be patient before new schemes start. In Wales from 2007 to 2013 Glastir explicitly included actions to protect the climate. In England some farmers who got help from Environmental Stewardship schemes might have been required to do things which made their farms more climate-friendly, for example by reducing the risk of soil erosion. In Scotland agri-environment schemes are now closed to new applicants.

If all gardeners, growers, farmers and other land managers could be climate-friendly in all their work, then perhaps – after the years of abuse we’ve given it – we might make Britain a more green and pleasant land. In ‘The Climate-Friendly Gardener: A Guide to Combating Global Warming from the Ground Up‘, The Union of Concerned Scientists United States say ‘…home gardeners can point the way to climate-friendly practices on a much larger scale: our nation’s farms’ and that climate-friendly farming practices could become the norm rather than the exception – but ‘for that to happen, cli­mate-savvy gardeners and others will need to weigh in on the debate.’ So being a climate-friendly gardener might be about more than just our own little patch!