Get off the fossil fuel habit 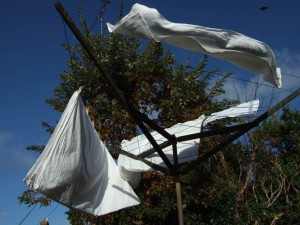 Washing drying in the sun and the wind – no tumble dryers involved!

We humans burn fossil fuels in lots of ways. We’ve become addicted to them. We even fight wars over them (though the people who want us to fight the wars may try to kid us – and may even kid themselves – that the wars are about something else).
In Rebecca Hosking and Tim Green’s 2009 film ‘A Farm for the Future’, peak oil expert Colin Campbell said that the fossil fuel we use is the equivalent of 22 billion slaves, working round the clock. That’s a world figure. So those of us who live in the rich part of the world have even more fossil fuel slave labour at our disposal. Making the change to living without that support will not be easy.
(David McKay has looked at the energy budget for Britain and how we could reduce our energy use and get it from renewable sources in a book, ‘Sustainable Energy – without the hot air’, that’s clear, straightforward, and at times wickedly funny. He’s even made it freely available online. David McKay’s produced a map to show how one version of his plans would look.)

The biggest fossil-fuel-guzzler for the luckiest people who have big gardens with swimming pools will be the pool, because of the huge energy needed to heat water to a comfortable temperature in the British climate, and also because of the need to top up the pool and to kill any pathogens in the water. So for those lucky people:

For the rest of us, another favourite summer activity for lots of people is cooking and eating outside on barbecues. If we eat lots of unsustainably produced meat – from imported animals, or animals fed on arable crops rather than pasture, for example – then we’ll be contributing to the greenhouse gas emissions from farms. Even if we eat meat from local pasture-fed animals, we’ll share responsibility for their methane emissions. But we can also avoid burning fossil fuels directly:

If we have greenhouses and use them to grow crops which would otherwise be imported, or grown in unsustainable ways, then greenhouses can help us to be more climate-friendly. But what about heating? In the winter some gardeners burn fossil fuel to keep their greenhouses heated. There are a few ways we can avoid this:

Lawn-lovers may want to look away now, because this is the tough one for them, but lawn maintenance can cause lots of greenhouse gas emissions, so here are the challenges:

Hedges don’t need to be cut as often as lawns, but the same principles apply:

The same thing applies to other garden features that we can choose to manage using power tools:

We can also consider the embodied energy in any materials we buy:

All of these things are pretty obvious. But what we do in our gardens may also save us from burning fossil fuel somewhere else: