Some useful books for the climate-friendly gardener (thanks to Ventnor Library for the use of the shelving!)

There’s a comprehensive list of further reading and references in the Climate-Friendly Gardener’s own book (watch this space for news of a publication date!) but here are a select few.

Get in touch if you’d like to suggest anything.

Many gardening magazines contain information that can easily be found in books. The magazines cost a lot more but sell because they’ve got more pictures and and the pictures are glossier. But even without all the other excellent reasons to join, it’d be worth being a member of the Royal Horticultural Society just to get their magazine, ‘The Garden’, because the information in it is reliable, and it includes the latest news on things like scientific research, gardens to visit, and new species and varieties of plants (and the pictures are just as glossy as anybody else’s).

One magazine, though, that is definitely worth reading is Permaculture magazine, published by Permanent Publications.

It’s also worth checking out the gardening writers in newspapers and magazines.  For example, I may be biased, what with my longstanding Grauniad habits, but I like the Guardian‘s regulars Lia Leendertz and Alys Fowler anyway, for their awareness of ‘green’ issues.

For keeping up to date with climate science and renewable energy technology, New Scientist and New Civil Engineer are worth reading, though for the details it’s still necessary to go to the original scientific articles, and for that the best place is now the internet – as long as the article is open access so that anybody can read it. If funding for science research doesn’t include the money to pay for making the results public, then only people working in academia or with lots of money (an article may cost several pounds, and a journal’s annual subscription may costs hundreds) are likely to read scientific journals. Public libraries can get photocopies of any articles even if they aren’t open access, but the poor reader must still pay for the copying, so ‘ordinary’ people are still put off reading science. Some public libraries have an arrangement with journal publishers which allows people to access journals from computers in the library – but that too is under threat as the so-called ‘austerity’ of cuts to local government closes more and more libraries. And that can hardly be a good for integrating the ‘two cultures’ which C. P. Snow warned us about over five decades ago – and without scientifically literate citizens how democratic can our democracy really be?

John Walker’s blog, Earth-Friendly Gardener, is excellent on sustainable gardening as a whole, and he’s one of the few gardening writers who considers how to be climate-friendly.
Deborah Scott Anderson’s blog, Climate Gardens, is about adapting to climate change rather than being climate-friendly, but is a useful source of information.
Fruit Forum, run by Joan Morgan.
Ruth D’Alessandro’s blog, The Wildlife Gardener, is hosted by the wonderful Naturenet.
The Ranger’s Blog, also from the award-winning Naturenet, for an eclectic mixture of anything and everything related to nature.
Wildlife Gardening Forum, hosted by Natural England
Food Climate Research Network Forum
Farming Futures blog
Met Office News Blog

I haven’t found many films, television or radio programmes which are directly relevant for climate-friendly gardeners, but here are a few I’ve found useful or inspiring. The two wonderful Natural World programmes ‘A Farm for the Future’ and ‘Cork – Forest in a Bottle’ are, sadly, not available to buy from the BBC DVD store or as downloads, so to see them we have to cheat and see pirated versions, which is hardly ethical – but these films are so good that perhaps it’d be more wrong not to spread the word.
‘A Farm for the Future‘ by Rebecca Hosking and Tim Green for BBC Natural World, February 2009, about modern farming’s dependence on fossil fuel (yes, even organic farming) and what we can do instead – agroforestry, forest gardens and permaculture, basically.
‘Cork – Forest in a Bottle‘, another wonderful BBC Natural World programme from December 2008 which shows the agroforestry system, the montado, based on cork oak in Portugal (in Spain the cork oak landscape is called dehesa).
‘Food Forest Suburb‘ by Geoff Lawton about making the places we live in beautiful and edible.
‘The Man who Stopped the Desert‘, the story of Yacouba Sawadogo in Burkina Faso in the Sahel, and his work to conserve soil and water.
‘Gardening in a changing climate‘, talk for the Royal Horticultural Society on 22 November 2012 by Julia Slingo, Chief Scientific Adviser to the Meteorological Office.
‘Deep Down and Dirty: The Science of Soil‘ , first broadcast on BBC Four in 2014 and presented by Chris Beardshaw, is good on the complex relationships between rocks, plants, fungi, earthworms and other animals and bacteria.

Radio 4 has some of the best science coverage in Britain, and the list of possible programmes could fill this whole page, but most are only available on iPlayer for a few days or weeks, so it’s not worth highlighting them here. One exception is ‘The Life Scientific‘, with episodes which are available indefinitely and which we can even download and keep. And of course there are Gardeners’ Question Time on Radio 4 and Gardeners’ World on BBC 2. Both can be very good, though some presenters still don’t seem to get it about some aspects of sustainable gardening, such as the need to conserve water. I have a soft spot for Pippa Greenwood, Bob Flowerdew, and Matthew Wilson, who are some of the gardeners who do grasp that gardeners must be environmentally friendly and who do know their stuff. It’s also worth checking out the films available from the Permaculture Association and Permanent Publications. Some of them are available on YouTube, so an oldie like me is still catching up – all tips welcome!

I started writing a book on climate-friendly gardening in 2010, and it was only a couple of years later that I found other people had been having similar ideas (collective unconscious, anyone?).

‘The Climate-Friendly Gardener: A guide to combating global warming from the ground up‘ by the United States Union of Concerned Scientists is an excellent introduction to climate-friendly gardening.

The Royal Horticultural Society are doing more and more on sustainable gardening.

Here are just a few more useful or inspiring websites:

and of course the worthy Wikipedia, including the article on
Climate-Friendly Gardening started by the Climate-Friendly Gardener. Sadly even now the edits have just been of the computer-nerd-proofreading variety, rather than new information or ideas, so if anybody reading this knows something I don’t, please share it!

Apps for tablets and smartphones 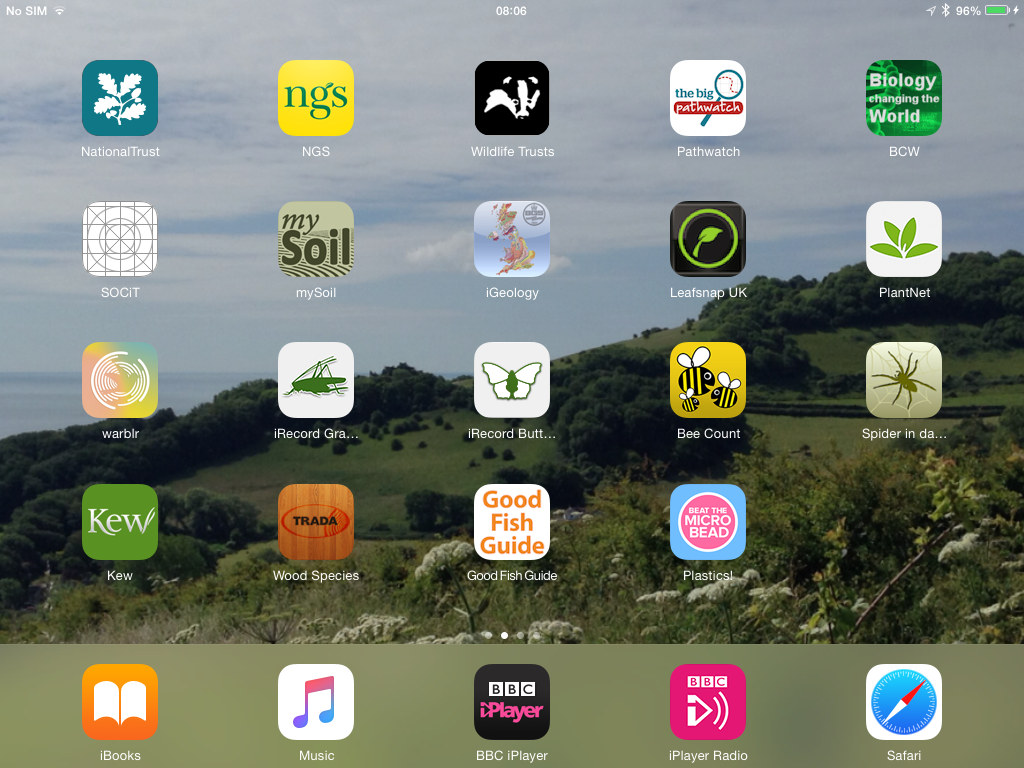 When I first wrote this page I’d had a tablet for less than a year, and even now – when it’s just over a year and I’ve added a few more to the list below – I’m still learning my way around apps, so if you know of any good apps for gardeners please let me know!

Here are a few I’ve found good so far.

Sadly I may not be recommending the BBC Weather app next year, after the news that the BBC intends to not get its weather data from the Met Office but from some other provider, but until that dire day arrives the BBC weather app is just wonderful (and people are protesting with petitions – here’s one of them – so perhaps we can stop this insane decision – and if you spot this stuff still here in 2016, please get in touch and remind me to do an update!).

There are quite a few good apps, and a few superb ones, for plants and other living beings.
Tree identification with the Natural History Museum’s Leafsnap UK
PlantNet is a good wild plant identification app that although it’s from France is still good for us in Britain, because they’ve got almost all the same wild plants we’ve got (and a whole load more).
Timber Research and Development Association (TRADA) Wood Species Guide app
Warblr is one app which I hoped would soon be available when I first wrote this page. It’s an app which can identify birds by their songs and calls. I signed up to crowdfunding for the first (and so far only) time for it, but they didn’t get quite enough support. I said I hoped they’d get enough funding soon – and now they have and it’s been launched at last!
iRecord Grasshoppers does more than it says in the name, because it helps to identify bush-crickets and crickets and other related species as well. And it’s got not just superb drawings and photographs and maps, but sound recordings as well! I love it.
iRecord Butterflies does a similar job for butterflies.

For visits to gardens and wildlife sites:
The National Trust‘s app came out in 2015 and it’s superb for finding their sites (not just gardens) near you or anwhere else in England, Wales and Northern Ireland.
The National Gardens Scheme Yellow Book app
The Wildlife Trusts Nature Finder app
Ordnance Survey MapFinder app